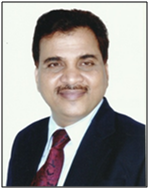 Prof RK Jena completed his MBBS from SCB Medical College, Cuttack in 1983 followed by post-graduation in General medicine from VIMSAR, Burla in 1988. He returned back to SCB Medical College for his PhD in Clinical Hematology which was completed in 2001. He is currently working as the Professor and Head of the department of Clinical Hematology. He is a “Fellow of Indian Society of Hematology & Blood Transfusion”. He has received advanced training in the management of Thalassemia from Cyprus (TIF) and Bone Marrow Transplantation from University of Minnesota, USA under VTP programme by American Society of Hematology (ASH). He was instrumental in the establishment of the Bone Marrow transplant Unit in the department of Clinical Hematology, SCB.

He was a member of various policy formulating agencies like the National Cancer Guideline 2019 for formulation of protocol for Adult Hematolymphoid Malignancies; NHM guidelines 2016 for Hemoglobinopathy, Ministry of Health, Govt. of India; Committee for the preparation of guidelines for Hemophilia by Ministry of Health (Blood Cell NHM Division), Govt. of India and the Committee Member for Blood Task Force NHM, Govt. of Odisha.