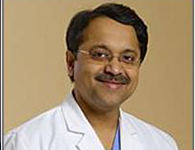 Dr. Uttam Tripathy is a 1986 graduate of SCB Medical College. Having finished with honors and within the top three in his class throughout his MBBS career, he started his MS in GeneralSurgery in PGIMER, Chandigarh and then a 2 year registrarship in General and VascularSurgery at PGI, Chandigarh. Subsequently, he did his MCh in Cardiovascular and Thoracic Surgeryfrom Bombay University, before he moved to the US. Further accredited training at theUniversity of California, San Diego and in Boston and Portland, Oregon Health Sciencesearned him board certifications in General Surgery and Thoracic Surgery.

Currently, he is affiliated with theHouston Methodist hospital and the DeBakey Heart and Vascular Center as an attendingCardiovascular and Thoracic Surgery. Having performed more than 800 cases per yearindividually, he has earned the peer reviewed award of “America’s Top Surgeon’s” for the last10 consecutive years, best Cardiac Surgeon in Fort Bend County for the last 5 years and hashelped develop a busy cardiovascular surgery service line at the satellite Houston MethodistSugarland hospital, the busiest hospital in Fort Bend County.

In his academic roles, he is a national investigator in minimally invasive treatment of Pulmonary Embolism (P.E) and part of the recently published “Optalyse” trial and the ongoing “KnockoutP.E study. He is also part of the hybrid trial for coronary artery disease (minimally invasivesurgical arm) and investigator in the use of drug coated stents for the peripheral arteries.

His hobbies inthe limited time he has is travel and he hopes to get back to his interest in oil painting.